Welcome to The Netherlands, welcome to Amsterdam, welcome to the Afrikadag here in the renowned Tropeninstituut. Some of you came from far away.  I am delighted to see you all here and really honored to say a few words and open this discussion. As I understand this session was completely sold out. It has been a while since I last sold out anything, I can tell you that

But before I give you my perspective on EU-Africa migration, I would first like to take the opportunity to thank a few people. To our friends at the PES, the FMS and the international secretary of the PvdA who - together - made this day possible. Thanks for the great cooperation in setting up and organizing this event. I’m sure that, thanks to you, this will be a great conference. A conference that is designed to trigger, inspire and motivate us all, in the work we do every day. 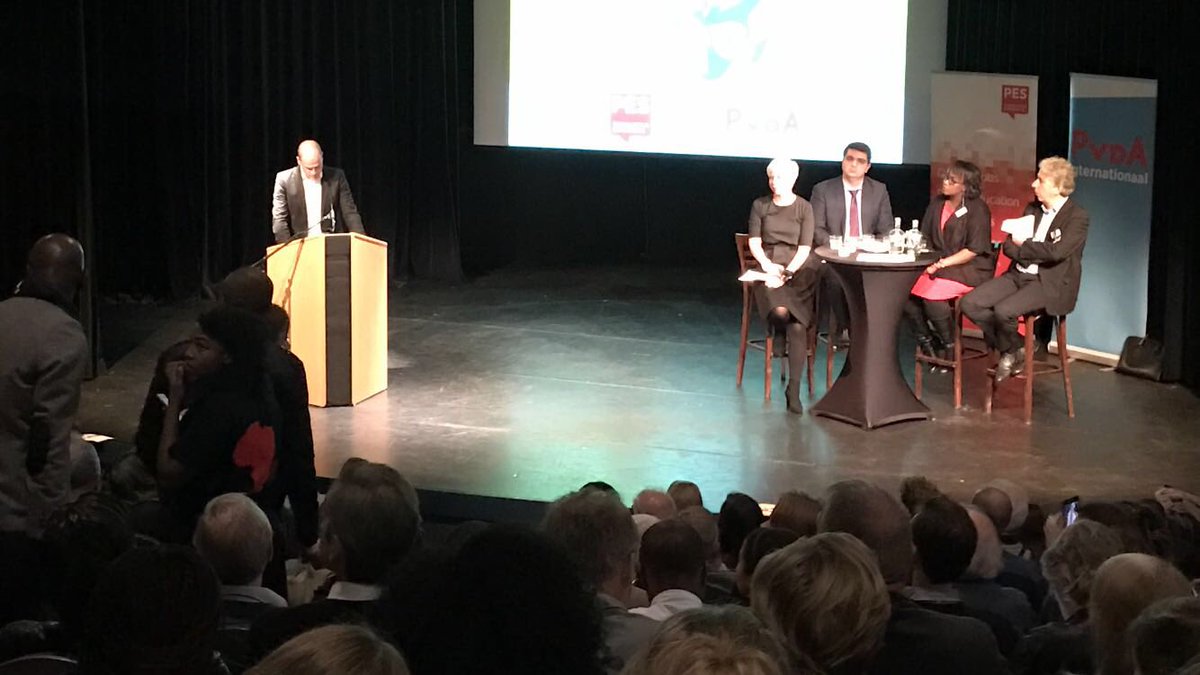 The subject which we will discuss the coming hour is a pressing topic. Not because EU/African migration is a new phenomenon, but because the momentum is here to actually address the challenges and creative perspective.

In recent decades, EU/African migration has significantly increased. Since the 60's, the main source countries of migration from Africa to Europe have been Morocco, Tunisia and Algeria. Resulting in large diasporas. Stricter immigration controls from the late 70's and onwards, resulted in permanent settlement and family reunification. But the countries of origin now vary, as do the reasons for migration from Africa.

With the increasing numbers, the debate in Europe has increased and sharpened as well. Today, migration is at the core of EU-Africa relations. Some might state that Europe did too little too late, but I'd like to argue that we should use this momentum to create sustainable new ways of working together. Critics say that the only reason European leaders are interested in working with African countries on migration deals, is to protect their own borders. I choose to believe that that is not the core.

The core priorities of the EU were and should always be saving lives at sea, supporting refugees and internally displaced persons. It is what we stand for, it's what Europe should stand for. In our election program it says we want to want to intensify resettlement programs, and the UNHCR should always play a key role in creating safe and legal routes for refugees. Europe will remain a safe haven and a shelter for those in need of protection. People don't choose to become a refugee, you are made one by a fatal coincidence. We should not forget that  anyone might find themselves to be a refugee at some point of their life. Europe should therefore show solidarity and unity.

But then we have this other, much larger group of people. Living in African countries where there might not be an immediate life threatening situation. But who have an unstoppable urge and desire to move up in life. To give the best possible education to their kids, who want to built better houses, provide for their families and believe that the only way they can achieve that, is by going to Europe.

And who would blame them? Not me. In other circumstances, it could have been me, or maybe yourself, sitting in one of those dangerous and packed boats. A recent study by the UN’s International Organisation for Migration showed that more than 70% of migrants traveling overland through north Africa to Europe have become victims of human trafficking and exploitation along the way. 70%! All hoping for a better life, but the truth is that the majority of these people - even after they experienced exploitation - are heading towards a rude awaking. The perspective they were hoping to find in Europe, does not always exists.

So then what; merely accept the fact that all these people - with dreams, skills, talents - do not have a perspective and future in Europe, nor in their country of origin? We can not. That's why I believe that the EU migration compacts with Africa should not be regarded as some cynical attempt from the EU, trying to save their own ass. They are serious attempts to find durable solutions to very complex situations. That is also the reason why they are all tailor made, looking at the demands from the people living in these countries. Aspects that create the need to migrate vary in every country. Where one country might need a focus on business investments, durable trade or education, another country might need collaboration on dealing with climate change and it's relation to migration.

There are some examples that stem hopeful; Senegal for example. Senegal is a key political partner for the EU in the West African region. It has a significant level of irregular migration to the EU (over 6,300 irregular entries in 2015). There now are various legal pathways already in place: in 2014, more than 220,000 Senegalese were legally residing in the EU, with an average of 15,000-20,000 new residence permits delivered each year by EU Member States to Senegalese nationals. Next to that, there has been progress with regard to fighting migrant smugglers and the root causes of irregular migration.

Of course, this is just one example and there are many snags attached to these compacts. But I do not see any other alternatives. So I think the question should not be whether Europe - or African countries for that matter - should get involved in these kind of agreements, yes or no. The question should be how to get involved! What are the biggest challenges, pitfalls and opportunities? I'm looking forward discussing these topics with my fellow debaters here on this stage this afternoon.